South Sudan: The Consequences of Two Years of War 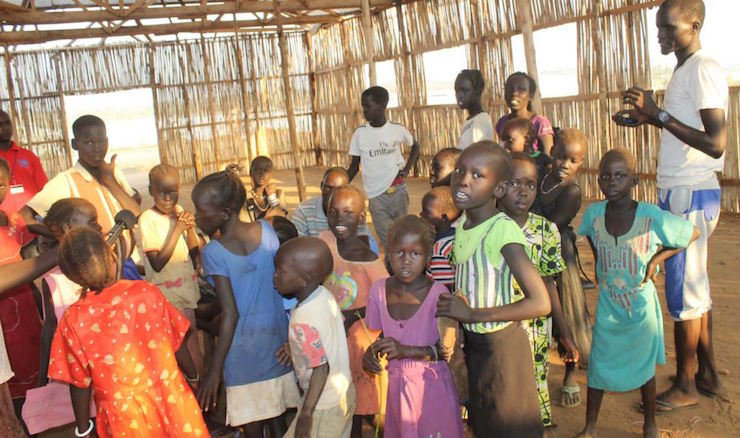 The conflict in South Sudan, rooted in political in-fighting and motivated by the twin vices of greed and self-interest, began on 15 December 2013. It spread rapidly across the country and soon evolved into a brutal civil war with millions of people displaced, tens of thousands killed, entire villages torched, public and private properties looted and destroyed, families and communities divided, women raped and children recruited to become soldiers. There are currently eight Comboni Missionaries and a Comboni Sister living among war-displaced communities in the conflict zone.

According to the United Nations Office for the Coordination of Humanitarian Affairs (OCHA), since December 2013 this conflict has devastated the lives of millions of South Sudanese and displaced more than 2.3 million people. About 1.6 million of them have been displaced internally in South Sudan and over 600,000 are refugees in neighbouring countries. About 200,000 civilians are living in the six ‘Protection Of Civilians’ (POC) bases provided by the United Nations Mission in South Sudan (UNMISS).

Many children have become orphans during the two years of conflict and, besides the trauma they have suffered, thousands of them are out of school. According to UNICEF, there are currently more than 1.8 million out-of-school children in South Sudan. A girl in South Sudan is three times more likely to die during childbirth than to complete primary school, and the conflict has worsened the situation by forcing more than 400,000 additional children out of school. Schools that should be zones of peace have instead been occupied by the military or destroyed, according to UNICEF.

Children have not only been affected by the disruption of education, but their physical security and well-being have been endangered by attacks against schools. Over 331 schools have been closed, damaged, occupied or are otherwise not functioning, and at least one third of these are the direct consequence of military use and attacks, according to a recent UNICEF report. What’s more, these children are among the estimated 7.5 million people who now lack food security and are at risk of starvation in South Sudan.

Thankfully, both the government of South Sudan and the SPLM Opposition signed a peace deal in August 2015. This peace agreement is holding up, despite some violations and delays in its implementation. In compliance with the peace agreement, President Salva Kiir has recently appointed the Opposition Leader, Dr. Riek Machar, as First Vice President of South Sudan. The latter is expected to return to Juba soon to form a unified national government and further implement the peace accord. This gives the Sudanese people some hope that peace may be fully restored and the country may return to the path of development.

Since the beginning of the crisis, the churches in South Sudan have come together and offered their assistance in finding a peaceful solution to end this conflict. The South Sudan Council of Churches has issued a number of joint statements to condemn this war and all forms of violence, power struggle, and killing of innocent civilians. The churches have also repeatedly stated that this is a senseless war.

The churches have always represented solidarity, hope, reconciliation and peace to the suffering people of South Sudan. In the country as a whole, the churches have been engaged in continuous prayers for peace, reconciliation and unity. In the conflict zone, and in the camps of internally displaced persons (IDPs), the churches, particularly the Catholic Church, have been an active presence that gives people hope and support in times of crisis.

The Catholic Church itself, beyond its usual prayer services, has carried out projects to help people heal from trauma and to re-stabilise their lives. Making use of a popular educational and holistic approach to healing trauma, some pastoral agents have been able to assist war-traumatised people to regain emotional health and to move on towards a more fulfilling and meaningful life.

The Diocese of Malakal, the largest in South Sudan, is perhaps the branch of the Catholic Church most affected by this conflict. Parishes have been completely looted and the priests and their communities have been displaced. Despite this, Catholic missionaries and some local priests have been a constant presence among the war-displaced communities in the IDP camps of Juba, Bor, Bentiu and Malakal. Some missionaries have never left their Christian communities, despite the risks.

There are currently eight Comboni Missionaries and a Comboni Sister living among war-displaced communities in Mogok, Old Fangak and Nyal (in Jonglei and Unity states), in the conflict zone. Another missionary lives among the IDPs in Malakal camp, and a group of missionaries offers pastoral assistance to war-displaced persons in IDP camps in Juba and Bentiu. They are itinerant missionaries who have made the choice to remain with the people they serve. Some have become war-displaced persons themselves and have made a home among their communities. Such a presence of solidarity gives people hope and strength as they wait for lasting peace. Their presence among people affected by war reminds everyone that the Church is a “mother” who reaches out to people wherever they are and welcomes everyone, regardless of their ethnicity. This is very important in the process of peace and reconciliation.

Missionaries have also been running an emergency response, distributing food and other essential items including seeds, tools, fishing hooks and hygienic materials. They also run schools for the displaced communities inside the IDP camp of Juba and within conflict zones, besides supporting education by providing scholarships for many students in Juba and abroad.

Providing continuous relief and developing programmes, especially education, is crucial in this time of crisis. However, a no less important task for the Church as a peace-maker is to continue engaging in peace-building, especially in this crucial period of peace agreement implementation. The Church must play an important and active role in the peace and reconciliation process and the healing process afterwards, as well as in the nation-building process.