Oral Literature: The qualities of a Tuareg sheikh 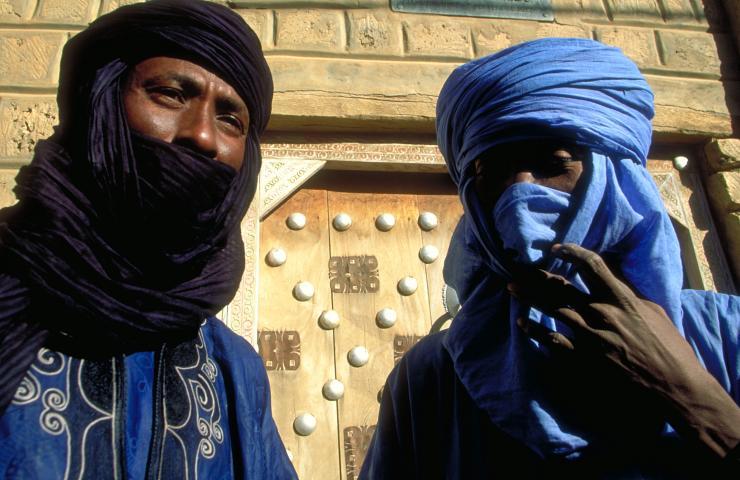 At the foot of the Atlas Mountains, a mountainous massif in the Western Sahara, there was a powerful kingdom ruled by a sheikh as wise as he was good. He had married the princess Hamida, which means gazelle.

The young queen deserved that name because of her grace and fragility. A year after the wedding she gave birth to triplets, and her father and subjects were filled with joy. But joy was soon mingled with mourning because after a few months the queen died.

Still, under the weight of threefold joy and great mourning, the ruler gathered his ministers and advisers to hear their opinion on the problem that was already worrying him. Three princes, heirs to the throne, were a great hope but also a source of fear: they could in future be the cause of tensions and fratricidal wars. What to do? The cruellest minister suggested exposing the three new-borns to the blazing sun: the heir would be the survivor. But the sheik refused such a barbaric solution.

One of the councillors suggested kicking all three of them out, but the ruler did not listen to him. Another suggested drawing lots to see who would be the heir, but this idea was also disliked.

Then the ruler reflected and made his decision: “They will live together and have the same education – he said -. When they grow up, they will prove their prowess and I will be able to choose the worthiest to sit on my throne. The tree is judged by its fruit!”.

Twenty years passed and the three princes, although educated in the same way, showed an obvious difference in character. One loved game of strength and dexterity: he could take a camel in a short time, break a reed at a hundred paces with a single arrow, and surpass the strongest warriors in the kingdom. That is why he was called Ben Haid, the strong prince.

The second loved studies and spoke several languages, knew the movement of the stars and the origin of the world. He was called Ben Huksen, the wise prince. The third ignored all these things but could sing and played the harp divinely. They called him El Gazil, the nice prince.

The time had therefore come to put them to the test. One day the sheikh invited the three princes and nobles of the kingdom to the palace and said: “My sons, all three of you have a right to the throne and I do not know who to choose. To remove this uncertainty, I will put you to the test: I propose that you leave the court and perform a deed worthy of a king, then I will choose the one who has performed the most meritorious deed. I will give you one week’s time.”

The valiant prince saddled his battle horse, took his bow, arrow and scimitar, and departed, disappearing in a cloud of dust. The wise prince took pen, paper and inkwell, and a bundle of books, and set off on his peaceful donkey.

The sympathetic prince set off quietly on foot with his harp slung over his shoulder and walked along a stream. The eight days seemed interminable to the impatient sheikh, so he jumped with joy when they announced the arrival of Ben Haid.

He was covered in dust and blood, and said: “I travelled three days to the borders of the kingdom, until I met a platoon of soldiers who barred my way. I defeated them all and their heads hang from the saddle of my horse. Am I not as strong as a king?” “Of course – replied the sovereign -, but we await the return of your brothers.”

He had not finished speaking when Ben Huksen entered. He had been studying all week, so much so that his hair had turned white. “I have studied the theories of the ancient sages and astronomers – he said – I have observed for three nights a star of Ophiucus conjoining with Aldebaran, the smallest star of Taurus. I can therefore predict with certainty the march of hurricanes and the rainfall for the next sixty years. Is not such wisdom worthy of a king?” “Of course – said the ruler -, but let us wait for the third brother.”

The sun was setting and the courtiers were already congratulating the two brothers, one of whom, they thought, would certainly be king. And suddenly, carried on the evening breeze, came the song of El Gazil accompanied by the chords of the harp. “Here comes the last suitor, “said the sheikh jokingly.

El Gazil looked tired but in his gaze shone the usual joy. “Alas! – he exclaimed with a sigh -. I fear, sire, that I bring you great disappointment because I have wasted my time.

A murmur of disapproval went up from the crowd of people present. He continued: “I went to Beni Unif, six kilometres from your palace. It is a poor village, and I stopped to drink at the well. But the well was without water. An old man who kept a scrawny little goat gave me some milk and advised me to leave because I would find nothing good in those ruins. And he explained to me that last winter a sandstorm had plugged the well. The people, discouraged, had dispersed, taking their cattle with them, and now the wind was the only master of the place. So, I began to play. The men who remained around came to hear my harp. I sang of the nobility of life, the beauty of being together and helping each other through difficulties. They joined me, first the young and then the old. We cleared the well and the water returned; we put the walls of the houses back up and repaired the roofs that had caved in. Then we sang of new-found joy. That is why I came late”.

The old sheikh shook his head thoughtfully and said: “Surely it seems less noble to dig a well than to know the motion of the stars or to slaughter twenty soldiers. But I say to you: you will be my successor, for you know how to guide men and help them to live happily.”

The whole court applauded the ruler’s wise judgment and so El Gazil became lord of the Atlas Mountains and grand sheikh of the Tuareg-Azjer.