Oral Literature: The Maasai – The origin of cattle 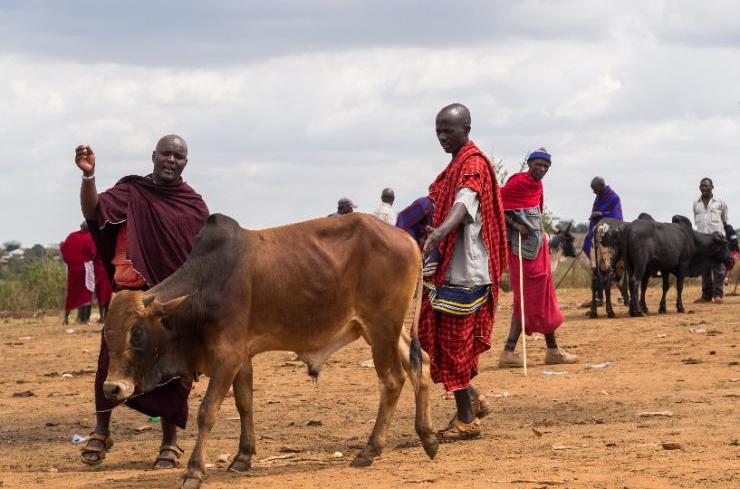 Naiteru-Kop, one of the gods of the Maasai, walked the earth at the dawn of the world and he found it already held some inhabitants.

He found a Dorobo (a member of a hunting people, also known as Okiek), a snake and an elephant living together. After Naiteru-Kop had passed by, the Dorobo found a cow in the bush and took it as his property. After that, the Dorobo would take the cow out into the grasslands to watch it feed, and then return to the homestead that he shared with the elephant and the snake at night.

The snake often sneezed, for it crawled in the dust which was trampled by the man, the cow and the elephant, and when it sneezed it sprayed it venom in the air. The elephant did not feel anything, its hide was so thick, but the man became very uncomfortable and developed rashes.

A season of rains came, turning the grass green and covering the land with small puddles in which the Dorobo’s cow could drink. But after the rains had passed the waterholes dried up until there was only one left. This was the elephant’s favourite spot; it was the elephant’s custom to graze upon the tall grass, harvesting it by the bushel with its trunk, and then go down to the waterhole and loll in the water and the cool mud. During the rainy season, the elephant gave birth to a calf, and the two of them would do this together.

When the rains had ended, the Dorobo could find no other water for his cow than the elephant’s waterhole. He asked the elephant not to muddy the hole so that he could water his cow, but the elephant answered that its custom had always been to enjoy the hole and it did not wish to change.

There, the calf met a man, a Maasai named Le-eyo, and they talked. The elephant calf told the Maasai why it had run away from the Dorobo who had killed the snake and the elephant to protect himself and his cow. Le-eyo said he wished to see this man, and so the elephant calf agreed to show him the way. They went back to the camp. There, the Maasai was very surprised by the hut the Dorobo had built: it was built on end so that the doorway looked up at the heavens. While they were standing there, Naiteru-Kop called out to tell the Dorobo to come out the next morning.

Le-eyo heard the message, and so the next morning it was the Maasai and not the Dorobo who went to learn what Naiteru-Kop wished to tell him.

Naiteru-Kop gave Le-eyo instructions, and he followed them carefully. He built himself a large enclosure, and to one side he built a little hut of bent branches and grasses. Then he searched the bush and found a thin calf. He took it back to his enclosure and slaughtered it. But he did not eat the meat. Instead, he spread out the calf’s hide and piled the meat upon it, and then he tied it up into a great bundle. He built a very large fire in the centre of his enclosure, and when it was roaring, he lifted the bundle of the calf’s meat and threw it into the fire. Then he hid in the hut. As he did so, the clouds gathered thickly overhead and thunder rolled over the plains.

While the man was hiding in the hut, a leather cord dropped from the heavens, and cattle of all sorts began to come down the cord into the enclosure. They descended until the enclosure was filled and they were bumping against each other to make room. One of them then put its foot through the wall of the Maasai man’s hut, and he cried out in alarm and surprise. At the sound, the cattle ceased coming down the cord from heaven. Naiteru-Kop called out, and Le-eyo went out to answer his call. “These are all the cattle you shall receive, – said Naiteru-Kop, – because by your cry you have stopped them coming. But they shall be yours to tend, and with them, you shall live”.

Since that time, the Maasai have herded their cattle. The Dorobo have become hunters, using clubs and bows, and arrows to kill their prey. When people who are not Maasai own cattle, the Maasai presume that the cattle have been stolen from Maasai and try to reclaim them.