Cop 27: Emissions, loss and damage, finance: the decisions – a lack of ambition 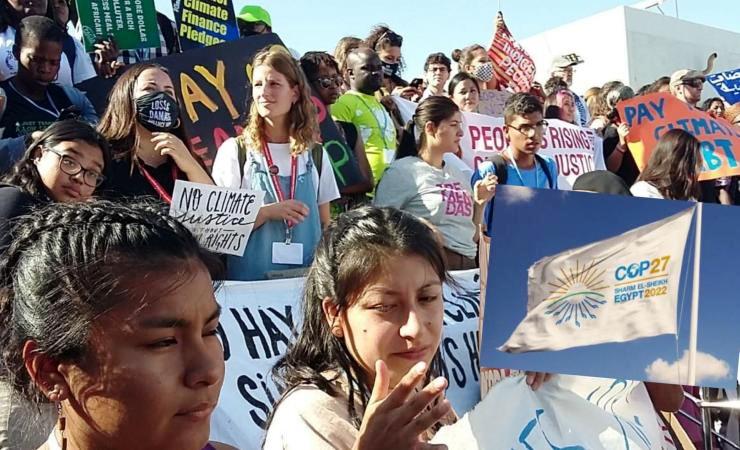 Cop 27 is over. A first step in climate justice, but zero progress on the central issue of CO2 emissions.

The principle of a new fund to respond to loss and damage suffered by the poorest and most vulnerable countries on earth in the face of climate change was introduced. But there was zero progress from the point of view of mitigating them. That is – the reduction of greenhouse gas emissions. The twenty-seventh United Nations World Climate Conference, the COP27 in Sharm el-Sheikh ended at dawn on Sunday 20 November. After a day and a half of ‘extra’ negotiations which became necessary due to the impossibility of reaching an agreement in the two weeks of negotiations that began on 6 November.

“Unless we limit the rise in average global temperature to 1.5 degrees, we will never have enough money to respond to the loss and damage caused by climate change.” This, in a nutshell, summarises all that happened at COP27 and the remark had first come on Saturday afternoon from Frans Timmermans, Vice-president of the European Commission which had even threatened to break the bank: “Better no agreement at all than a bad agreement”.

It was only right, therefore, to finally create – after years of requests and in the face of the devastating climatic change – a fund to support the nations most exposed to and least responsible for climate change. But a lack of ambition on declining global emissions will only dramatically exacerbate the crisis. Until, in fact, the fund will be effectively useless.

Not surprisingly, the secretary general of the United Nations, Antonio Guterres, underlined: “We must drastically reduce emissions and do it now. And it is a question to which Cop27 has not provided an answer”. “The world won’t thank us when, tomorrow, it hears only apologies from us – added Timmermans -. What we have done is too small a step forward for the inhabitants of the Earth. We have seen no additional efforts from the main culprits of greenhouse gas emissions.”

Nonetheless, the acceptance by the international community of the principle according to which it is necessary to dig into the wallet to repair the damage caused by global warming certainly represents a step forward. It is the main objective achieved by COP27 which was held in Africa and therefore, inevitably, has granted special attention to the matter.

“This is an important step on the climate justice front – Guterres said -. I welcome the decision to create a fund and make it operational in the near future. It is clear that this is not enough, but it is a necessary political signal to rebuild the trust (between the North and the South of the world, ed.) that had been undermined”.

That said, there are still many questions. In fact, the text indicates, in a generic way for now, that it has “decided to create an intervention fund to meet losses and damages”. It is to be supported by a “transition committee” which will be responsible for establishing the operating rules of this new instrument. In fact, to date, it is not known how this fund will be financed, by whom, and above all which will be the beneficiary countries. China is a case in question. Despite the gigantic quantity of greenhouse gas emissions that it releases into the atmosphere every year and despite now being a global industrial power, it still insists on being classified as a developing nation. Just to be able to access the funds.

The loss and damage fund is a whole new ball game

In short, the game has not yet begun. The committee is expected to provide the first recommendations at the next conference, Cop28 to be held in Dubai in 2023. It is not too pessimistic to imagine a global confrontation on the issue.

On the other hand, the principle according to which rich countries must provide assistance to poorer ones had already been established way back in 2009 at the Cop15 in Copenhagen. At the time, it was said that wealthier nations would have to allocate $100 billion a year to allow the less well-off to adjust, but that promise, 13 years later, has never been fully fulfilled.

Of all the decisions taken at the COP27 in Sharm el-Sheikh, however, the principle of a fund for loss and damage and the deadlock on mitigation was not only the advance. Other issues have been addressed, other promises made and other changes envisaged by the nearly 200 nations that attended the conference in Egypt.

During the COP27, Timmermans announced that the European Union is ready to study a 57% reduction of its greenhouse gases by 2030, compared to 1990 levels. An increase compared to the current objective, set at 55%.

The announcement, however, was criticized by non-governmental organizations: “A two percentage point increase is far removed from the 65% we would need in order to align the European Union with the 1.5-degree goal,” said Chiara Martinelli, director of the Climate Action Network in Europe.

The proposal was made by Barbados. The prime minister of the island state, Mia Mottley, has called for a review of the statutes of the International Monetary Fund (IMF) and the World Bank. The initiative, dubbed “Bridgetown” after the capital of the Caribbean nation, aims to make it easier for the two international organizations to finance the infrastructure needed to adapt to climate change.

Mottley is supported by the director of the IMF herself, Kristalina Georgieva, and the hope is that the seed sown at Cop27 can lead to a concrete proposal next spring. This would be an epochal change, and for this reason, complex negotiations are to be expected on this front as well.

3 – A financial shield against climatic dangers

On November 14, the group of the most vulnerable countries (V20) and the G7 announced the launch of a Global Shield against climate risks. Again, the goal is to help the most vulnerable populations finance the response to the impacts of climate change.

So far, however, the budget is absolutely insufficient: only 210 million euros have been promised. The first beneficiaries are expected to be Bangladesh, Costa Rica, Fiji, Ghana, Pakistan, the Philippines and Senegal.

4 – A partnership for an equitable energy transition

Already launched during the COP26 in Glasgow, the Partnership for a just energy transition (JETP) was joined by the United States, Great Britain and the European Union, which had pledged to pay 8.5 billion dollars to support the decarbonisation of less advanced economies.

During the G20 held in Bali, during the same days as the Cop27, a new agreement was signed between Indonesia, on the one hand, and a group of wealthy nations on the other. In exchange for the funding, the Asian nation has pledged to shut down its coal-fired plants and reach a peak in emissions no later than 2030.

At the Cop27 in Sharm el-Sheikh, new climate prosperity plans were also launched by the countries of the southern hemisphere. Their goal is to finance projects that are able to attack the crisis but, at the same time, stimulate economic growth and create jobs.

The first country to launch a climate prosperity plan was, in 2021, Bangladesh. In Egypt, Ghana, the Maldives and Sri Lanka also joined.

6 – The goal of 1.5 degrees was reaffirmed, but a dangerous precedent was set

Although there were rumours of a possible, sensational abandonment of the objective, the principle according to which the world must aim for a limitation of the increase in the global average temperature to 1.5 degrees Celsius has been reaffirmed.

The final text of COP27 in Sharm el-Sheikh, however, limits itself to re-proposing the wording contained in the Paris Agreement: “It is necessary to limit the increase clearly below 2 degrees and to continue efforts to remain as close as possible to the 1.5”.

The mere fact that it has been hypothesized to abandon the COP21 milestone in the French capital, however, risks setting a dangerous precedent, in view of the forthcoming conferences.

At least, the text released by the Egyptian summit recalls that “the impacts of climate change will be much more limited if the 1.5-degree goal is achieved”.

As regards the abandonment of coal, the most harmful fossil fuel by far for the climate, progress has been decidedly limited. In fact, it was limited to asking for “accelerated efforts for a progressive reduction of its use without CO2 recovery systems”.

Furthermore, the final text of COP27 also calls for the acceleration of a just transition towards renewable energies. Instead, the request of the nations that asked to mention also the need for a reduction (phase down) from the exploitation of oil and gas was rejected.