South Africa: “A Missionary Parish, to reach out to many who are still far away” 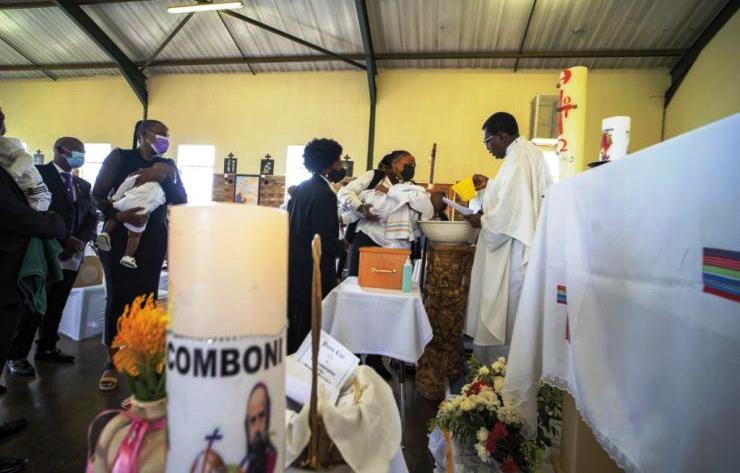 The parish of St Daniel Comboni is located in the eastern part of Mamelodi, a name that means, mother of melodies, because of the concentration of musical talent offered by its inhabitants. We visited the place.

Mamelodi, north-east of Pretoria, is a township created in 1953 to relocate the African population during the Apartheid era. Ten years ago, it had a population of 334 000, but now it is probably more than half a million. It is a dormitory town, with many middle-class workers, government and private sector employees who commute daily to Pretoria or any other nearby towns.

“During the day, only retired people stay at home, because children also go to school, ” says Fr Jerome Anakese, the parish priest of St Daniel Comboni. – Many of the unemployed live in informal settlements. At night, especially in winter, there is a smell of smoke. They collect wood or, if they can, they buy it, to heat themselves outside their tiny shacks. There is a tremendous social imbalance”.

The number of those collecting garbage for recycling grows every day. “They do a hard and undignified work, pushing heavy bales on carts through the streets.  They are left to their own fate, without any protection,” continues the Comboni Missionary. – Those unemployed try their luck in the informal economy, selling on the streets, driving taxis or recruiting clients for them. They intend to emulate their working neighbours who drive private cars through the streets of Mamelodi. Others, unfortunately, turn to crime or to drink. The insecurity is a consequence of social contrasts and high levels of unemployment”.

The parish of St Daniel Comboni started in 2007. The Comboni community, along with parishioners, began to establish the first structures. The priest’s house, the hall, still used as church, and some classrooms for catechesis were built. The various groups and sodalities commenced to develop. “People are very welcoming and about 200 attend Mass every Sunday,” points out Fr Jerome.

The parish sodalities and six of the nine small Christian communities are already functioning as before the pandemic. Seventy-five catechumens are preparing for baptism, “a good number for a small community like ours”, says the parish priest.

Forty per cent of the Mass attendees are people under 30. They are also beginning to reorganise themselves. Ivonne Moswane is one of their leaders. Originally from Mashabela, in Limpopo, Ivonne, 27 years old, arrived at St Daniel Comboni in 2014. She grew up with her grandmother who introduced her to the Catholic faith. She studied civil engineering and is now completing her apprenticeship in plumbing. “Young people have many challenges, but they need to take responsibility. Many come from broken families and haven’t had someone who listens to them to help them heal their wounds”, she said.

Fr Jerome agrees: “In general, family life is in a deep crisis; there are many single mothers and very few structured traditional families. Most marriages are short-lived and children end up living with grandparents or relatives. Young people are hooked by modern culture, music, parties, fun— ‘we are free’, they say, ‘we know what we want’”.

Ivonne sees music and dance among the most remarkable talents of Mamelodi’s young people. “Many don’t get into university after high school and stay at home doing nothing. Others turn to drugs or alcohol and to finance it, they steal”.

Teenage pregnancy, domestic or sexual violence and dropping out of school are also challenges affecting young people. Ivonne recognises that there are also positive stories, such as the case of Mpho, who quit drugs and now teaches young people, through talks and sport, how to beat drugs.

“I am trying to regroup the young people again, bring them closer to the parish and get them off the streets; to resume our programme ‘the soup route’ in which we go around the neighbourhood and offer soup and bread to the needy”, comments Ivonne, who offers her gratitude to the Comboni Missionaries. “I met them in Limpopo, and from them I learned that it is more important to give than to receive. I love going to the church; there I find mental serenity and security. I have my vis-a-vis with God.”

“I want to grow spiritually and make a positive contribution to the community”. She would like to see young people maturing with an open mind, a vision and mission which makes them participants in their own personal growth, in the Church and in the community at large.

Fr Jerome points out: “I would like our parish to be missionary, to reach out to many who are still far away. Two kilometres from the mission, there is an area where people are settling. We are not there yet”. As far as the parish social commitment, he considers that there is still a lot to do. “We have to organise our visits, registers and so on, but we already have two initiatives running, the delivery of about 10 kg of food to about 100 people and the distribution of blankets that have been donated to us. The community is attentive to those who do not have their basic needs covered, such as food and household needs. The choir has even donated goods to one of the elders. “

Finally, he said: Mamelodi is a mission in line with our Comboni charism, namely to reach out to the peripheries, as Pope Francis also often reminds us, carrying out a pastoral ministry that brings together social and faith aspects, creating living and mature missionary communities”.