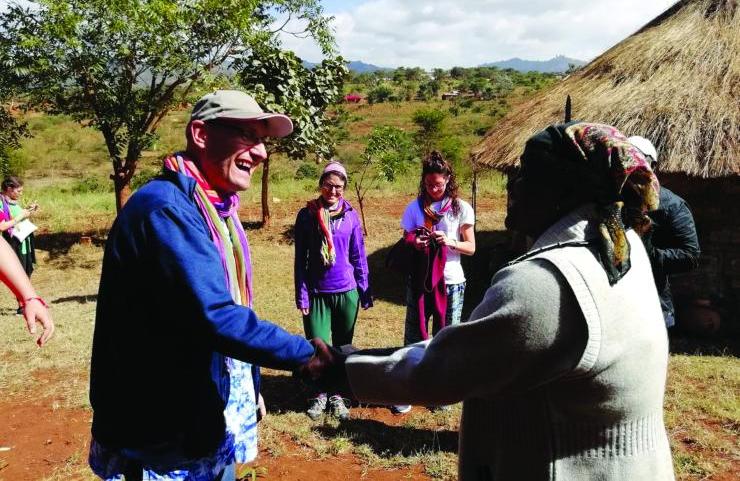 As a student of architecture, he came to Africa. The humanity of the people left a deep impression on him.  The experience not only broadened his horizon but also opened up a new way in his life. A Comboni missionary, Brother Alberto Parise talks about his vocation and missionary journey.

First, I came to Africa as a student of architecture.  I had the chance to visit some missions in Tanzania, together with some friends. And it was a life changer. The hospitality of the Christian communities, and the humanity they shared, opened a much broader horizon in my life.

I kept cultivating my relationship with the missions and the people of those communities. My interest in different peoples and cultures, social justice and transformative encounters grew. As I deepened my faith journey in the light of the Word of God, I developed a more critical awareness of the unjust socio-economic structures in society. I also tried to respond to such situations through service to the impoverished and excluded ones. In those days, in fact, in Italy we were experiencing the first immigration waves of people fleeing their countries because of wars, persecution, and impossible living conditions. I thus joined other organized volunteers to work for the welcoming, protection, promotion and integration of migrants and refugees.

As I approached the end of my university studies, I had many opportunities and choices at my disposal. I was already off to a good professional start in my father’s architectural firm. Besides, I had an opportunity to pursue an academic career. But I felt that my deepest joy was elsewhere: it was in that encounter with the Risen Christ mediated by the experience of lived fraternity with peoples of different cultures and latitudes. Consequently, after my graduation, through a process of discernment, I joined the Comboni Missionaries.

After four years of formation in Italy, I became a Comboni missionary brother. I made my first religious profession on 24th May 1997.  I was sent to Kenya to study social ministry at Tangaza University College from 1997-2000. As Brothers, we are consecrated missionaries who contribute to mission through professional service and the care of humanity. The ministry of Brothers has a particular focus on fraternity in all its many aspects, including the integral development of the human person, justice and peace, integral ecology and the promotion of human and peoples’ rights.

It follows, therefore, that this is a ministry predominantly open to the social, anthropological and cultural dimensions of the Kingdom of God, oriented to social transformation, to witness and to the proclamation of fraternity and the animation of the Christian community. Social ministry, therefore, is an important dimension of our formation, because we learn how to turn our professional expertise into a ministry, a transforming service to humanity and the local community.

In 2000, after completing my studies at Tangaza, I was assigned to work in Kenya. My first mission was at Kariobangi Parish in Nairobi. Thereafter, I was appointed the director of the then Institute of Social Ministry at Tangaza University College in Nairobi from 2004-2015. During this same period 2005-2010, I was also involved in the training of Comboni brothers at the Comboni Brother Centre in Nairobi. In 2016, I was assigned to Padova, Italy where I worked with young people as a vocation promoter. Since 2019 I am working at the headquarters of the Comboni missionaries in Rome.  The superiors asked me to coordinate the office of Justice, Peace and the Integrity of Creation in our Institute.

With hindsight, I can say that all I know today, I have learned it in Kenya, in my encounter with the people, their sense of faith, their sense of humanity, and their culture of Utu. That has been a transformative encounter for me, and I feel privileged and blessed for the opportunity to journey along with such people and communities. We shared various struggles for social transformation, linking our faith to social responsibility and responding to the cry of the poor and the cry of the Earth.

Among many experiences, I always love to recall the journey of healing and reconciliation after the infamous Kariobangi massacre in 2002, especially through the commitment of the huduma ya haki na amani (the justice and peace ministers) of the Parish. In that process, we learned the peace procedures and traditions of various communities in Kenya. We learned this through our encounter with the Community Peace Museums that helped us along the journey of peace.

I saw God’s grace at work in the regeneration of the people most affected, who overcame the humiliation and loss. They felt reconnected with their human roots, a new communion with God, and a new meaning and sense of purpose in life, becoming ambassadors of peace in the community.

I am amazed that I have already lived 25 years of missionary life because I still feel like a beginner. When I look back, I cannot help but feel a profound wonder at what the Risen One has done in my life: the encounters with humanity and experiencing personally that regeneration of Africa with Africa that our founder Daniel Comboni had prophetically envisaged.