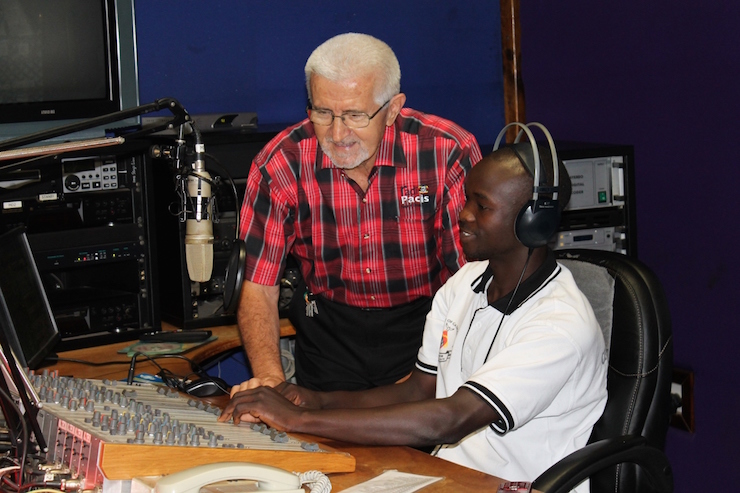 Radio Pacis, the only FM radio station in the West Nile region of Northern Uganda, is operated by a Comboni Missionary at the service of the people and the Church.

In the early morning, the sun rises behind the green hills of Arua. People start moving, and the first fires become visible. From a group of huts, a loud voice wishes everyone “Good morning”. It’s the voice of the speaker of Radio Pacis: the only FM station operating in West Nile, northern Uganda.

Father Joseph Pasolini, a Comboni Missionary who has lived in the country for almost forty years, is the Director of the radio station. He tells us: “Radio Pacis has been serving the region since 2004. It operates on the frequencies of 90.9FM and 94.5FM from Arua, and 101.4FM from Gulu. The main broadcast languages are Lögbara, Kakwa, Alur, and Madi Luo; and all the frequencies also feature English programmes. The station trusts the strategic position of the main antenna and its powerful output to cover the entire West Nile region, as well as parts of Northern Uganda, the Democratic Republic of the Congo and South Sudan”.

Radio Pacis’ format is a mixture of news and religious and secular music. The station presents local, regional, national, and international news, documentaries, and dramas from the local villages. Sports results are presented daily, alongside the community service programme known locally as We Go Forward, which is broadcast in all the local languages. In Rural Debates, local issues are discussed by members of the communities.

Father Pasolini elaborates on Rural Debates: “This very interactive programme is particularly loved by listeners. They enjoy the opportunity to have their say through Radio Pacis – both during the time of recording and later, on broadcast to a very large audience”.

The station offers speciality programmes 7 days a week, including musical interludes. Choirs of West Nile hosts local choirs. The Cultural Perspective offers debates in Lögbara and Kakwa every Sunday. The popular Good Morning West Nile runs from 6am to 9am, Monday through Friday. The programme is particularly popular for its The People’s Voice segment – one of the best examples of citizen journalism available.

The comical and humorous In Daa Mood programme is a chat show, while Scripture Moment is an inspirational religious programme that has been airing on Radio Pacis since the station was set up. It broadcasts in English, Lögbara, Kakwa, Alur, Luo, and Madi.

A journalist at Radio Pacis says that political affairs have an important role on the radio: “The current political, social and economic issues in the region are discussed every Saturday in The West Nile We Want. Leaders are invited to render themselves accountable to their local community. The latest programme in the schedule is Conflict Sensitive Journalism. It promotes a conflict-sensitive approach to news coverage and radio content. It advocates that media practitioners take a more active role in finding solutions to conflicts within their purview, through their daily journalistic work”.

West Nile is a multi-ethnic region. People speak a variety of languages, rendering it difficult – if not impossible – for radio programmes to be all-inclusive. Yet radio is the only medium that can reach and deliver programmes, news, and advertisements to communities unreachable by other electronic media in the region. Radio Pacis also offers advertisers a strong, clear signal that reaches the entire West Nile with quality programmes and reasonable rates.

Father Pasolini recounts the history of the station for us: “The radio station is owned by Arua Diocese. Requests for the station were put forth in two Diocesan Synods in 1994 and 1999. In 2001, Bishop Emeritus Frederick Drandua appointed two missionaries with the mandate to initiate the radio station. In February 2008, the station began broadcasting 48 hours a week. Later, this expanded to cover the whole day, well into the night. In June 2008, a process was begun to research the feasibility of erecting another mast in Gulu, in order to relay the broadcasts to that area of northern Uganda. Since then, Radio Pacis has grown in its offer of programmes: entertainment, music, and information targeting the holistic development of individuals and their communities”.

Radio Pacis is now seeking a license to broadcast from Kampala, targeting primarily the people of Northern Uganda (Lögbara, Kakwa, Alur, Madi, Acholi) who live and work there.